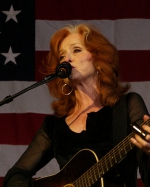 Bonnie Lynn Raitt is an American blues singer-songwriter, born in Burbank, California. During the 1970s, Raitt released a series of acclaimed roots-influenced albums which incorporated elements of blues, rock, folk and country, but she is perhaps best known for her more commercially accessible recordings in the 1990s including “Nick of Time”, “Something to Talk About”, “Love Sneakin’ Up on You”, and the slow ballad “I Can’t Make You Love Me”. Raitt has received nine Grammy Awards in her career and is a lifelong political activist.

Raitt, the daughter of Broadway musical star John Raitt and his first wife, pianist Marjorie Haydock, began playing guitar at an early age, something few of her high school female friends did. Later she would become famous for her bottleneck-style guitar playing. “I had played a little at school and at camp”, she later recalled in a July 2002 interview. The camp Raitt refers to is Camp Regis-Applejack, located in the heart of the Adirondacks.

In 1967, Raitt entered Harvard’s Radcliffe College as a freshman, majoring in African Studies. “My plan was to travel to Tanzania, where President Julius Nyerere was creating a government based on democracy and socialism”, Raitt recalled. “I wanted to help undo the damage that Western colonialism had done to native cultures around the world. Cambridge was a hotbed of this kind of thinking, and I was thrilled.”

One day, Raitt was told by a friend that blues promoter Dick Waterman was giving an interview at WHRB, Harvard’s college radio station. An important figure in the blues revival of the 1960s, Waterman was also a resident of Cambridge. Raitt went to see Waterman, and the two soon became friends, “much to the chagrin of my parents, who didn’t expect their freshman daughter to be running around with 65-year-old bluesmen,” recalled Raitt. “I was amazed by his passion for the music and the integrity with which he managed the musicians.”