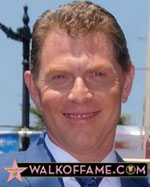 The Hollywood Chamber of Commerce honored Chef Bobby Flay with the 2,553rd star on the Hollywood Walk of Fame on Tuesday, June 2, 2015 at 11:30 a.m. PDT. The star in the category of Television was dedicated in front of Eastown Apartments at 6141 Hollywood Boulevard. Flay is the first chef to be honored with a star on the famous Walk of Fame. Event was live-streamed exclusively on www.walkoffame.com

Helping Emcee Leron Gubler, Hollywood Chamber President/CEO to unveil the star were and guest speakers Iron Chef Michael Symon, President of Food Network & Cooking Channel, Brooke Johnson and daughter Sophie Flay. “We are thrilled to honor our very first culinary star on our fabled Walk of Fame,” stated Leron Gubler. “Bobby Flay has entertained the masses with his culinary expertise and has opened the eyes of food lovers everywhere.”

A native of New York City, Bobby Flay has come a long way in both the entertainment and restaurant industry since he discovered his culinary identity at the age of 17.

From his first appearance on Food Network in 1994, Flay has been a continued presence hosting programs which are both entertaining and informative, bringing cooking tips and information on American regional fare to a national audience. Flay’s show, Grillin’ & Chillin’, premiered in 1996, followed by Hot Off the Grill and Emmy award-winner Boy Meets Grill, as well as his hit series, Throwdown with Bobby Flay. Currently, the chef and culinary superstar can be seen in his most recent primetime hit series, Beat Bobby Flay, as well as his daytime Emmy award-winning Bobby Flay’s Barbecue Addiction. And on June 7th, he returns as co-host for season eleven of Food Network Star, where along with Giada De Laurentiis and Food Network execs, Flay will be looking for the next great television food personality. He can also be seen alongside many familiar Food Network faces in the new series Guilty Pleasures, reigning supreme in Kitchen Stadium as one of the original US Iron Chefs in Iron Chef America on Food Network, as well as Brunch @ Bobby’s, on both Food Network and sister network Cooking Channel. As if that weren’t enough, Flay is also a staple on numerous seasonal and holiday specials, including his most recent Emmy award-nominated, Thanksgiving at Bobby’s.

In addition to his extensive body of work on Food Network and Cooking Channel, Flay has also lent his culinary expertise to numerous talk shows and morning shows including CBS This Morning and the Today Show, sharing delicious recipes which he demonstrates with ease, making them accessible and achievable for a national audience. Flay also expanded his small screen credits out of the kitchen to include a star turn as himself on the HBO series Entourage.

Flay works tirelessly to challenge the way Americans view and taste food – making it bold, zesty and always fun. He continues to share his knowledge and enthusiasm for food through his cookbooks and cooking programs. Bobby’s thirteenth cookbook “Brunch @ Bobby’s” (Clarkson Potter) will hit bookstores in Fall 2015.

At the very young age of 17, Flay started working as a cook at the famed Theatre District haunt, Joe Allen’s. The job had been arranged by his father, who was a partner in the restaurant. After a short time, Joe Allen himself became so impressed by Flay’s talents that he paid the young cook’s tuition to the French Culinary Institute.

Following his graduation in 1984, Flay worked with restaurateur/owner Jonathan Waxman at Buds and Jams, where he first discovered the sweet-heat of Southwestern ingredients. It was at these burgeoning restaurants that Flay met other icons of the era – Wolfgang Puck, Jeremiah Tower – who he credits with spawning an entire generation of chefs. After Jams, Flay debuted as Executive Chef at the East Village’s Miracle Grill where he caught the attention of restaurateur Jerome Kretchmer. Kretchmer offered the 25-year old the opportunity to create his own sensation at Mesa Grill, which opened in 1991.

Flay brought his unique amalgam of innovative food and inviting hospitality to Las Vegas with the 2004 opening of Mesa Grill at the legendary Caesars Palace. The City’s upbeat urban energy continues to provide an ideal backdrop for Mesa Grill’s lively cuisine.

At his New York eatery, Bar Americain, which opened in March 2005, Bobby Flay takes the intimacy of a midtown brasserie and injects it with authentic American flavors and style. Drawing from regional American ingredients, Flay’s dishes rejuvenate old classics and celebrate the abundance of America’s diverse and delicious heritage. Bar Americain has received rave reviews from the press, including two stars from The New York Times and in November 2009, Bobby Flay brought Bar Americain to Connecticut opening up in the Mohegan Sun.

Bobby Flay Steak, which opened in July 2006 in Atlantic City, is Flay’s first-ever steakhouse. At this restaurant, he presents classic steakhouse fare that he remembers enjoying as a child in New York City and on the Jersey Shore as well as new dishes that incorporate his famous grilling techniques and signature Southwestern fare.

In March 2007, Flay brought Mesa Grill to The Cove, Atlantis in Paradise Island, Bahamas and in July 2008, Bobby opened his first Bobby’s Burger Palace (BBP) in Long Island. At BBP,  Flay presents an array of burgers inspired by his extensive travels and love of the grill in a convenient casual setting. To date, there are 18 BBP outposts with additional locations on the way.   Flay’s sixth fine dining restaurant, Gato, opened March 2014 in New York City’s NOHO District. Gato opened to rave reviews from the press, including two stars from The New York Times, and a year later still remains one of the most sought-after reservations in downtown New York City.

Flay is personally involved with such non-profit organizations as Citymeals-on-Wheels, Make-A-Wish foundation, Food Network’s and Cooking Channel’s philanthropic wine and food festivals (NYCWFF & SOBEWFF). He is an equine welfare advocate and his passion for horses has helped raise funds for the Thoroughbred Retirement Foundation (TRF) and the Grayson-Jockey Club Research Foundation. He has been awarded the Earle I. Mack Champion Award recognizing his efforts on behalf of the TRF.

The Hollywood Walk of Fame is an internationally-recognized Hollywood icon. With approximately 24 star ceremonies annually broadcast around the world, the constant reinforcement provided to the public has made the Walk of Fame a top visitor attraction. The Hollywood Chamber of Commerce continues to add stars on the Walk of Fame as the representative of the City of Los Angeles. The Walk of Fame is a tribute to all of those who worked diligently to develop the concept and to maintain this world-class tourist attraction. The Walk of Fame is open to the public. No paid admission or assigned seating at star ceremonies. It is understood that the cost of installing a star on the Walk of Fame upon approval is $30,000 and the sponsor of the nominee accepts the responsibility for arranging for payment to the Hollywood Historic Trust, a 501(c)3 charitable foundation. The funds are used to pay for the creation/installation of the star and ceremony, as well as maintenance of the Walk of Fame. Download the official app for iPhones and Android devices at http://officialhollywoodwalkoffameapp.com 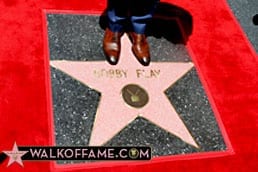