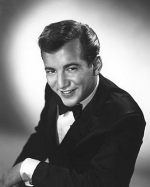 Darin performed widely in a range of music genres, including pop, rock, jazz, folk and country. Although unknown to his public, his health was dangerously fragile and strongly motivated him to succeed within the limited lifetime he feared he would, and ultimately did, have.

Darin married Sandra Dee; they met while making the film Come September. They made a few more movies together at Universal Studios that were moderately successful. They had one son, Dodd Mitchell Darin. She and Darin divorced in 1967.

He was also an actor, singer/songwriter and music business entrepreneur. His wish for a legacy was “to be remembered