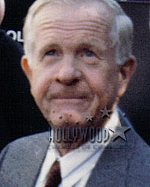 In memory of Hollywood film industry biographer and reporter and Walk of Famer Bob Thomas flowers were placed today on his star on the Hollywood Walk of Fame on Friday, March 14, 2014 at 1 p.m. PDT. The star in the category of Motion Pictures is located at 6801 Hollywood Boulevard.
“Rest in peace Bob! Ana Martinez, producer of the Walk of Fame signed the card on behalf of the Hollywood Historic Trust and the Hollywood Chamber of Commerce.

Bob Thomas is an American Hollywood film industry biographer and reporter who has worked for the Associated Press since 1944.

Born in San Diego, he grew up in Los Angeles, where his father was a film publicist. He attended UCLA. He lives in Encino with his wife, Patricia. They have three daughters.

Thomas made his mark by engaging celebrities in activities that brought out their personalities, whether by measuring their waistline after childbirth or testing just how tall a leading lady needed to be by kissing her himself. Acclaimed as the dean of Hollywood reporters, Bob Thomas has been writing about the movie business for the Associated Press since the days when Hollywood was run by the men who founded it: Jack Warner, Darryl F. Zanuck, Harry Cohn and Louis B. Mayer.

During his long history of reporting for the AP, Thomas authored at least 30 books. Many in the film industry credit his 1969 biography of producer Irving G. Thalberg as sparking their interest in pursuing a career behind the scenes. Other Thomas biographies include Joan Crawford, Marlon Brando, David O. Selznick, Walter Winchell, Bob Hope, Bing Crosby, Howard Hughes, Abbott & Costello, Walt Disney, and a children's book, Walt Disney: Magician of the Movies.