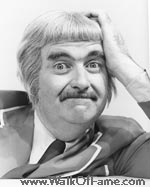 Robert James Keeshan was an American television producer and actor. He is most famous as the title character of the children's television program Captain Kangaroo, which became an icon for millions of people during its 30-year run from 1955-1984.

Keeshan was born in Lynbrook, New York. In 1945, during World War II, he enlisted in the United States Marine Corps Reserve, but was still in the United States when Japan surrendered. He attended Fordham University on the GI Bill. An urban legend claims that actor Lee Marvin said on The Tonight Show that he had fought alongside Keeshan at the Battle of Iwo Jima in February-March, 1945. However, Marvin not only never said this, but had not served on Iwo Jima, and Keeshan himself never saw combat, having enlisted too late to serve overseas.

Network television programs began shortly after the end of the war. Howdy Doody, an early show which premiered in 1947 on NBC, was one of the first. Debuting on January 3, 1948, Keeshan played "Clarabell the Clown", a silent Auguste clown who communicated by honking several horns attached to a belt around his waist. One horn meant "yes"; another meant "no". Clarabell often sprayed Buffalo Bob Smith with a seltzer bottle and played practical jokes. Keeshan gave up the role in 1952, and was replaced.