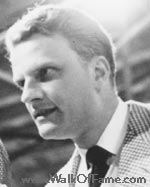 William Franklin "Billy" Graham, Jr. KBE is an American evangelical Christian evangelist. As of April 25, 2010, when he met with Barack Obama, he has been a spiritual adviser to twelve United States presidents going back to Harry S. Truman, and is number seven on Gallup's list of admired people for the 20th century. He is a Southern Baptist. He rose to celebrity status as his sermons were broadcast on radio and television.

It is said that Graham has preached in person to more people around the world than any other preacher in history. According to his staff, as of 1993 more than 2.5 million people had "stepped forward at his crusades to accept Jesus Christ as their personal Savior". As of 2008, Graham's lifetime audience, including radio and television broadcasts, topped 2.2 billion.

He was born November 7, 1918 to William Franklin Graham I and Morrow Coffey, on a dairy farm near Charlotte, North Carolina. Graham was raised in the Associate Reformed Presbyterian Church by his parents. In 1933, when Prohibition in the United States ended, Graham's father forced Graham and his sister Katherine to drink beer until they vomited, which created an aversion, in both of them, to alcohol and drugs. According to the Billy Graham Center, Graham was converted in 1934 at age 16 during a series of revival meetings in Charlotte which were led by evangelist Mordecai Ham. However, he was turned down for membership in a local youth group because he was "too worldly". He was persuaded to go see Ham at the urging of one of the employees, Albert McMakin, on the Graham farm.

After graduating from Sharon High School in May 1936, Graham attended Bob Jones College, then located in Cleveland, Tennessee, for one semester but found it too legalistic in both coursework and rules. At this time, he was influenced and inspired by Pastor Charley Young from Eastport Bible Church. He was almost expelled, but Bob Jones, Sr. warned him not to throw his life away: "At best, all you could amount to would be a poor country Baptist preacher somewhere out in the sticks. You have a voice that pulls. God can use that voice of yours. He can use it mightily." In 1937, Graham transferred to the Florida Bible Institute on the site of today's Florida College in Temple Terrace, Florida. In his autobiography he writes that he "received calling on the 18th green of the Temple Terrace Golf and Country Club," which is immediately in front of today's Sutton Hall at Florida College in Temple Terrace. Reverend Billy Graham Memorial Park is today located on the Hillsborough River directly east of the 18th green and across from where Graham often paddled a canoe to a small island in the river, where he would preach to the birds, alligators, and cypress stumps. Graham eventually graduated from Wheaton College in Wheaton, Illinois with a degree in anthropology, in 1943. It was during his time at Wheaton that Graham decided to accept the Bible as the infallible word of God. Henrietta Mears of the First Presbyterian Church of Hollywood was instrumental in helping Graham wrestle with the issue, which was settled at Forest Home Christian camp southeast of the Big Bear area in Southern California. A memorial there marks the site of Graham's decision.