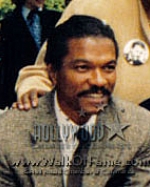 Billy Dee Williams is an American actor, artist, singer, and writer, best known for his role as Lando Calrissian in the original Star Wars trilogy.

Williams was born in New York City, New York, the son of Loretta, a West Indian-born elevator operator from Montserrat, and William December Williams, Sr., a Texas-born caretaker. He has a twin sister, Loretta, and grew up in Harlem, where he was raised by his maternal grandmother while his parents worked at several jobs. Williams graduated from Manhattan's School of Performing Arts, where he was a classmate of Diahann Carroll, who coincidentally played the wife of his character Brady Lloyd on the 1980s prime-time soap Dynasty.

He first appeared on Broadway in 1945 in The Firebrand of Florence. He returned to Broadway as an adult in 1960 in the play version of The Cool Word.