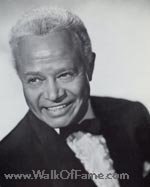 William Boone “Billy” Daniels was a singer active in the United States from the mid-1930s to 1986, two years before his passing.

He was popular in Europe after he headlined at ‘The London Palladium’ in 1952, having broken the house records. He toured the Moss Theatre circuit of the UK in the 1950s as ‘America’s most exciting singer’ He first toured the United States with the Erskine Hawkins Band in 1936 as their featured vocalist. He sang every day of 1938 on New York radio, for 12 different sponsors. ‘It was me or the horse racing’, Daniels remarked. His forte was as a nightclub entertainer and he was the biggest cabaret draw in New York throughout the 1950s alongside the comedian Jimmy Durante. In 1958 Daniels was the first entertainer to sign a long term contract to appear in Las Vegas for 3 years at The Stardust. He had performed in musicals on Broadway early in his career a minor role to the famous Bill ‘Bojangles’ Robinson the legendary tap dancer in a short lived musical ‘Memphis Bound’ in 1945. More notable was the long running, over 700 performances, of ‘Golden Boy’ with Sammy Davis Jr. in 1964 directed by Arthur Penn. Daniels toured the US in 1975 with Pearl Bailey in the all black Hello, Dolly!. In London’s West End he headlined a 1978 presentation of Bubbling Brown Sugar. He appeared on television in the US and UK and Australia and Canada throughout the 1950s and 1960’s. He was popular in Australia where he first toured with The Andrews Sisters in 1954.

Daniels was born in Jacksonville, Florida. His father was a railroad mailman, his mother a school teacher and organist. Daniels had a heritage of Portuguese sailor, Native American African American and pioneer white frontiersman Daniel Boone. Daniels moved to New York Harlem from Jacksonville in 1935. He originally moved to New York to attend Columbia University to become a lawyer, but was side-tracked, during the Depression. Daniels grandmother was a seamstress in Harlem for the Ziegfeld Follies and encouraged her grandson to sing without a microphone, like the others to diners in the club where he was a busboy, a singing waiter. He served bandleader Erskine Hawkins and was hired.