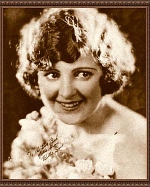 Billie Dove was an American actress. She was born as Bertha Bohny in New York City to Charles and Bertha Bohny who were Swiss immigrants. As a teen, she worked as a model to help support her family and was hired at the age of 15 by Florenz Ziegfeld to appear in his Ziegfeld Follies Revue. She legally changed her name to Lillian Bohny in the early 1920s. and migrated to Hollywood, where she began appearing in silent films. She soon became one of the most popular actresses of the 1920s, appearing in Douglas Fairbanks’ smash hit Technicolor film The Black Pirate, as Rodeo West in The Painted Angel, and was dubbed The American Beauty, the title of one of her films.

She married the director of her seventh film, Irvin Willat, in 1923. The two divorced in 1929. Dove had a huge legion of male fans, one of her most persistent being Howard Hughes. She shared a three-year romance with Hughes and was engaged to marry him, but she ended the relationship without ever giving cause. Hughes cast her as a comedian in his film Cock of the Air. She also appeared in his movie The Age for Love. She was also a pilot, poet, and painter.

Following her last film, Blondie of the Follies, Dove retired from the screen to be with her family, although she was at the time still popular. She next married oil executive Robert Kenaston in 1933, a marriage that lasted for 37 years until Kenaston’s death in 1973. They had two children &mdash; one son and one adopted daughter. She later had a brief third marriage to architect John Miller, which ended in divorce.