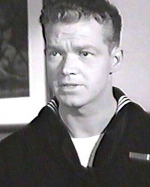 Bill Williams was an American television and film actor. He is best known for his starring role in the early 1950 television show The Adventures of Kit Carson.

Williams was born as Herman August Wilhelm Katt in Brooklyn, New York. His parents were German immigrants. He grew up in New York City, calling himself William H. Katt. Tall, handsome, and a natural athlete, Williams became a professional swimmer, performing in underwater shows. He enlisted in the United States Army during World War II, but was discharged before the war’s end and became an actor. He made his debut in The Blue Room in 1944, using the professional name Bill Williams.

Williams had appeared in ten films before he landed the lead role in The Adventures of Kit Carson. The show ran for 104 episodes between 1951 and 1955. In 1957, he co-starred with Betty White in television’s Date with the Angels. Williams played Federal agent Martin Flaharty in The Scarface Mob, the pilot for The Untouchables. In the series, however, the role went to Jerry Paris. Williams turned down the lead in 1958’s Sea Hunt, thinking an underwater show would not work well on television. Lloyd Bridges accepted the part and turned it into a hit. Williams then starred as a former Navy frogman in Assignment: Underwater, which ran for just one season. He played a variety of roles on the Perry Mason show, in which his wife co-starred with Raymond Burr. He also made guest appearances on television and worked in low budget science fiction films until his retirement in the early 1980s.

Williams married actress Barbara Hale in 1946. They had met during the filming of West of the Pecos and would have two daughters and a son, actor William Katt.