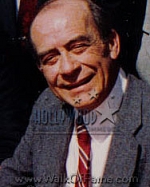 Bill Stout was an American broadcast journalist. A veteran for over thirty years, Stout's career began after World War II at the Los Angeles Times, from which he moved to CBS News.

Stout left CBS News in the 1980s and ended his career as an anchor for the CBS-owned station in Los Angeles KCBS-TV, then known as KNXT. At KNXT, he was also known as a highly regarded investigative reporter and political commentator who preferred to ignore partisan ideologies and divisions.