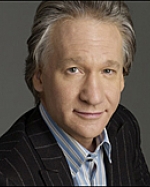 COMEDIAN BILL MAHER HONORED WITH 2,417th STAR ON THE HOLLYWOOD WALK OF FAME in the Category of Television

Bill Maher was born in New York City and raised in River Vale, New Jersey. After graduating from Cornell University, he got his start doing stand up in New York and his break came when he worked as the host at New York's Catch A Rising Star Comedy Club in 1979. He still performs at least fifty dates a year in Las Vegas and in sold-out theaters all across the country.

For the last seventeen years, Bill Maher has set the boundaries of where funny, political talk can go on American television. First on "Politically Incorrect" (Comedy Central, ABC, 1993-2002), and for the last eight years on HBO's "Real Time," Maher's combination of unflinching honesty and big laughs have garnered him twenty-six Emmy nominations. In October of 2008, this same combination was on display in Maher's uproarious and unprecedented swipe at organized religion, "Religulous," directed by Larry Charles ("Borat"). The documentary has gone on to become the 7th highest grossing documentary ever.

In addition to his television program – which has featured such regular visitors as Vice President Joe Biden, Ben Affleck, Robin Williams, Arianna Huffington, Alec Baldwin and Michael Moore – Maher has written four bestsellers: True Story, Does Anybody Have a Problem with That? Politically Incorrect's Greatest Hits, When You Ride Alone, You Ride with Bin Laden and most recently, New Rules: Polite Musings from a Timid Observer.

ABOUT THE HOLLYWOOD WALK OF FAME – www.WalkOfFame.com
The Hollywood Walk of Fame is an internationally-recognized Hollywood icon. With about 24 induction ceremonies annually broadcast around the world, the constant reinforcement provided to the public has made the Walk of Fame a top visitor attraction. The Hollywood Chamber of Commerce continues to administer the Walk as the representative of the City of Los Angeles. The Walk is a tribute to all of those who worked so hard to develop the concept and to maintain this world-class tourist attraction. Fans of the Hollywood Walk of Fame will be thrilled to know that The Official Hollywood Walk of Fame application is now available. The application which can be downloaded from the iPhone store, is the best resource for information and news about all of the 2,400+ stars on the Walk of Fame. Hollywood Walk of Fame is also celebrating a fabulous black tie gala in the grand ballroom at Hollywood & Highland Center on Wednesday, November 3, 2010 which will conclude the year-long celebration of the Walk of Fame 50th. The Gala Committee is pleased to have Walk of Fame honorees representing the five creative categories as honorary co-chairs for this important occasion. Sir Tim Rice for Live Theatre, Tim Robbins for Motion Pictures, Ryan Seacrest for Radio, Celine Dion for Recording, and Julia Louis-Dreyfus for Television. For more information, please visit www.walkoffame50.com