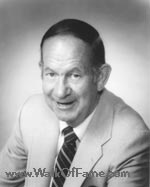 Bill Keene was a television and radio personality who became famous in the Los Angeles, California market as a traffic and weather announcer. He was particularly known for his colorful humorous traffic reports which included numerous puns and he became a fixture in Los Angeles broadcasting.

His Los Angeles broadcasting career began in 1957 at KNXT-TV as a weather reporter. He is credited with helping pioneer the station's hourlong news format. During the same period he also reported the weather on the sister radio operation KNX. Later he hosted the daytime television variety show "Keene at Noon" which was later called "The Bill Keene Show."

In 1976 he started working full-time at KNX where he became one of the first regular radio reporters in Los Angeles.

Puns became a regular part of his broadcasts. For example, when a ladder was reported on the freeway he would announce ?Watch out for rung way drivers? and ?Don?t worry, the highway patrol will be taking steps to remove that ladder.?