Radio personality Bill Handel of KFI.640 was honored with the 2,385th star on the Hollywood Walk of Fame. Leron Gubler, President and CEO of the Hollywood Chamber of Commerce, presided over the ceremony. Guests included KFI Sports reporter Rich Marotta and news anchor Gary Hoffman.

William Wolf Handel was born in Brazil in 1951. At the age of five, he immigrated to the United States with his parents, Leo and Nechama Handel. Growing up in the San Fernando Valley, young William learned English without the benefit of a bilingual education program, and became one of the world's leading reproductive law experts.

In 1989, Bill began doing a Saturday morning legal advice show on KFI. Bill's law show, "Handel on the Law", is a unique combination of marginal legal advice, and Handel's outrageous remarks. It didn't take long for KFI to realize that this politically incorrect, self – proclaimed "Latino Jew" had the tell-it-like-it-is attitude listeners were looking for. Bill soon was given the coveted weekday morning show time slot.

The Bill Handel Morning show quickly became the top morning show in the market and "Handel on the Law" now goes out over 160 radio stations nationwide.

Whether you're talking about Big Brother, Big Business, Big Legal Problems, or Big Macs, you'll rarely find Bill without an opinion. His rapid – fire commentary gives listeners the information they want in the way they want it.

Bill Handel is an energetic, highly entertaining, yet smart alternative to pseudo-intellectual, boring, talk radio. For more than a million talk radio listeners – waking up just wouldn't be the same without Bill Handel.

Despite his busy schedule Handel finds time to work with various charities such as the Susan G. Komen for the Cure, City of Hope and Make a Wish Foundation.

Last July Handel celebrated the morning show's 15-year anniversary. He can be heard on KFI.640 on weekdays from 5 a.m. to 9 a.m. and on Handel on the Law on Saturdays from 6am to 11 am. 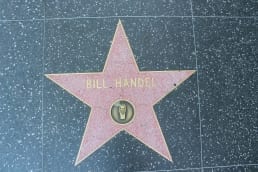