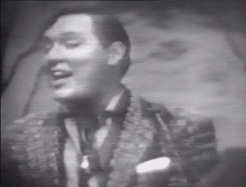 Bill Haley was one of the first American rock and roll musicians. He is credited by many with first popularizing this form of music in the early 1950s with his group Bill Haley & His Comets and their hit song “Rock Around the Clock”.

Bill Haley was born in Highland Park, Michigan. Because of the effects of the Great Depression on the Detroit area, his father moved the family to Boothwyn, Pennsylvania, near the town of Chester, when Bill was seven years old. Haley’s father played the banjo, and his mother was a technically accomplished keyboardist with classical training. Haley told the story that when he made a simulated guitar out of cardboard, his parents bought him a real one.

The anonymous sleeve notes accompanying the 1956 Decca album “Rock Around The Clock” describe Haley’s early life and career thus: “Bill got his first professional job at the age of 13, playing and entertaining at an auction for the fee of $1 a night. Very soon after this he formed a group of equally enthusiastic youngsters and managed to get quite a few local bookings for his band.”

The sleeve notes continue: “When Bill Haley was fifteen he left home with his guitar and very little else and set out on the hard road to fame and fortune. The next few years, continuing this story in a fairy-tale manner, were hard and poverty stricken, but cramful of useful experience. Apart from learning how to exist on one meal a day and other artistic exercises, he worked at an open-air park show, sang and yodelled with any band that would have him and worked with a traveling medicine show. Eventually he got a job with a popular group known as the “Down Homers” while they were in Hartford, Connecticut. Soon after this he decided, as all successful people must decide at some time or another, to be his own boss again – and he has been that ever since.? .