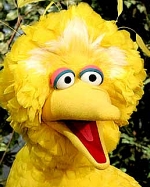 Big Bird is the main protagonist of the children's television show Sesame Street. Big Bird, like many of the other Sesame Street characters, is a Muppet character. He is sometimes referred to simply as "Bird" by his friends.

Officially performed by Caroll Spinney since 1969, he is an eight-foot two-inch tall bright yellow bird. He can roller skate, ice skate, dance, sing, write poetry, draw and even ride a unicycle. But despite this wide array of talents, he is prone to frequent misunderstandings, on one occasion even singing the alphabet as one big long word, pondering what it could ever mean. He lives in a large nest behind the 123 Sesame Street brownstone and he has a teddy bear named Radar, after Walter "Radar" O'Reilly of M