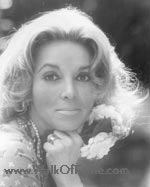 Beverly Garland was an American film and television actress, businesswoman, and hotel owner. Garland gained prominence for her role as Fred MacMurray’s second wife, “Barbara Harper Douglas”, in the 1960s sitcom My Three Sons. In the 1980s, she co-starred as Kate Jackson’s widowed mother, “Dotty West”, in the television series Scarecrow and Mrs. King, on CBS. She also had a recurring role as Ginger Jackson on The WB Television Network series 7th Heaven.

Garland was born Beverly Lucy Fessenden in Santa Cruz, California, the daughter of Amelia Rose, who worked in business, and James Atkins Fessenden, a singer and salesman. Garland grew up in Glendale, California. Her 1950s acting roles tended to be tough women who could handle themselves in violent situations. Nineteen fifty-six was a busy year for Garland, as she played a female marshal in the Western Gunslinger, with Chris Alcaide as her deputy, a prison escapee in Swamp Women, and a scientist’s wife who battles an alien in It Conquered the World. All three movies were directed by Roger Corman and were spoofed in the 1990s by Mystery Science Theater 3000. Garland then starred as undercover police officer “Casey Jones” in the syndicated television series Decoy.

In 1957, Garland made television history as the star of the syndicated TV series Decoy, the first American television police series with a woman in the starring role. However, it only lasted a single season of thirty-nine episodes. Despite its relatively short run, this groundbreaking series paved the way for many future police/detective shows starring women, such as NBC’s Police Woman starring Angie Dickinson, ABC’s Honey West starring Anne Francis, CBS’s Cagney and Lacey starring Tyne Daly and Sharon Gless, and ABC’S Charlie’s Angels starring Kate Jackson.

Garland appeared twice as Dooris Denny Bona in the episodes “Remember the Alamo” and “The Widow of Kill Cove” in 1960 in Rod Cameron’s syndicated private detective series COronado 9. In 1957, she guest starred as Elli Austin in the episode “Rodeo Rough House” of another of Cameron’s syndicated series, State Trooper. She also appeared in the 1955 episode “Man Down, Woman Screaming” of Cameron’s first syndicated series, City Detective, the story of a tough New York City police lieutenant. She appeared too as Sarah Garvey in the episode “Cattle Drive to Casper” in the NBC anthology series Frontier. At about this time, she also appeared in the first Brian Keith series Crusader, a Cold War drama.