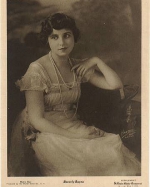 Beverly Bayne was an American actress who appeared in silent films beginning in 1910 in Chicago, Illinois, where she worked for Essanay Studios.

Born in Minneapolis, Minnesota, she moved to Chicago when she was six. She stayed there for a time, and in Philadelphia, Pennsylvania, before she settled in Chicago. She was sixteen when by curiosity she happened by the Essanay Studios. She was told she had a camera face. She began working there at a salary of $35/week. It was soon increased to $75 a week. In a few years the actress was earning $350 weekly.

Her first films were The Rivals and The Loan Shark, both in 1912. She played the feminine lead in the latter. Under contract to Essanay at this time was Gloria Swanson. It is said that Swanson wept because her eyes were blue and not brown as were Bayne’s. Brown eyes were considered preferable for photography then. Other actors on the lot were Wallace Beery, Charlie Chaplin, and Francis X. Bushman. Bushman demanded Beverly as his female lead, and soon they were a romantic duo, appearing in twenty-four films. Their first film together was Pennington’s Choice. In 1917 the couple made Romeo and Juliet, which generated a sizeable profit. Bushman and Bayne were married in 1918.

Bayne and Bushman left Essanay and made films for Metro Pictures from 1916-1918 and are credited as the first romantic team in film. In 1920 the couple starred in a play, The Master Thief, which did well. Later they appeared in vaudeville and as guest stars in dramatic stock.