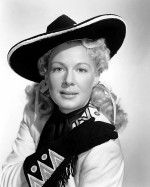 Betty Hutton was an American stage, film, and television actress, comedienne and singer.

Hutton was born as Elizabeth June Thornburg, a daughter of railroad foreman Percy E. Thornburg and his wife, the former Mabel Lum. Her father abandoned the family for another woman and they did not hear from or see him again until they received a telegram, in 1939, informing them of his death from suicide. Along with her older sister Marion, Betty was raised by her mother, who took the surname Hutton and was later billed as the actress Sissy Jones.

The three started singing in the family’s speakeasy when Betty was 3 years old. Related troubles with the police kept the family on the move, and eventually they moved to Detroit. When interviewed as an established star appearing at the premiere of Let’s Dance, her mother ? arriving with her, and following a police escort ? quipped, “At least this time the police are in front of us!” Hutton sang in several local bands as a teenager, and at one point visited New York City hoping to perform on Broadway, where she was rejected.

A few years later, she was scouted by orchestra leader Vincent Lopez, who gave Hutton her entry into entertainment. In 1939, she appeared in several musical shorts for Warner Bros., and appeared in a supporting role on Broadway in Panama Hattie and Two for the Show, both produced by Buddy DeSylva.