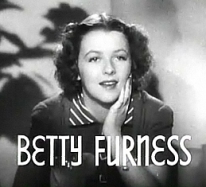 Born in New York, New York, Furness began her professional career as a model before being signed to a film contract by RKO Studios. Her first film role was as the “Thirteenth Woman” in the 1932 film Thirteen Women but her scenes were deleted before the film’s release. Over the next few years she appeared in several RKO films, and became a popular actress. Among her film successes were Magnificent Obsession and the Fred Astaire and Ginger Rogers film Swing Time. By the end of the decade she had appeared in over forty films, but during the 1940s found it difficult to secure acting roles.

In 1948 Furness was performing in the television series Studio One which was broadcast live. She filled in for an actor to promote Westinghouse products during the advertisement break, and impressed the company with her easy and professional manner. They offered her a contract to promote their products and she subsequently became closely associated with them. One of television’s most recognizable series of commercials had Furness opening wide a refrigerator door, intoning, “You can be sure. if it’s Westinghouse.”

Ironically, Furness may be best known today for a Westinghouse commercial in which she did not appear: during a live spot, a refrigerator door failed to open, creating one of the most infamous bloopers in TV history. This actually did not happen to Furness, as has often been claimed, but to another actress who was subbing for her.