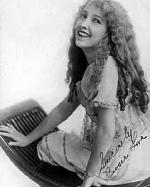 Bessie Love was an American motion picture actress who achieved prominence mainly in the silent films and early talkie eras. With a small frame and delicate features, she played innocent young girls, flappers, and wholesome leading ladies. In addition to her acting career, she wrote the 1919 movie A Yankee Princess.

Love was born Juanita Horton in Midland, Texas. She attended school in Midland until she was in the eighth grade, when her chiropractor father moved his family to Hollywood. Bessie graduated from Los Angeles High School and then received from her parents of a trip around the United States. After six months of traveling, she finally returned home to Los Angeles.

To help with the family’s financial situation, Love’s mother sent her to Biograph Studios, where she met pioneering film director D.W. Griffith. Griffith, who introduced Bessie Love to films, also gave the actress her screen moniker. He gave her small roles in his films The Birth of a Nation and in Intolerance. She also appeared opposite William S. Hart in The Aryan and with Douglas Fairbanks in The Good Bad Man, Reggie Mixes In, and The Mystery of the Leaping Fish. In 1922 Love was selected one of the WAMPAS Baby Stars.