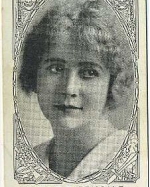 Bessie Barriscale was an American silent film and stage actress, and a major star for producer Thomas Ince in the late 1910s.

Barriscale was born Elizabeth Barry Scale, in Hoboken, New Jersey to Irish immigrants from County Cork. Her cousins were actresses Edith and Mabel Taliaferro. Barriscale began her film career in 1913, and worked intensively for New York Motion Picture Company and Triangle Film Corporation until she announced her retirement in the early 1930s. In 1918, Barriscale was contracted by J.L. Frothingham of B.B. Features and the Roberson Cole Company to make sixteen films. B.B. Features was an Arizona corporation. The movies were to be completed, produced, and delivered by January 21, 1921. At this time Miss Barriscale’s managers insured her life for a half million dollars against eventualities. The total cost of the features totaled more than $1,000,000.

Barriscale was enthusiastic about William Shakespeare and wanted to bring one of his plays to the screen. The actress was an excellent swimmer. In The Woman Michael Married she was featured in a movie adapted from a novel by Annette Kellerman. Barriscale went so far as to hire a swimming and diving instructor and took lessons in Venice, California. A ninety-pool was constructed at Brunton Studios where the scenes were shot. The film was directed by Henry Kolker.

In 1919, she traveled with her husband, actor, director, and film producer Howard C. Hickman and their small son, on a world tour. They anticipated producing motion pictures during their journey and traveled with a cameraman.