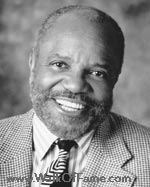 Berry Gordy, Jr. is an American record producer, and the founder of the Motown record label, as well as its many subsidiaries.

Berry Gordy II was lured to Detroit by the many job opportunities for blacks offered by booming automotive businesses.

Berry Gordy, Jr’s older siblings were all prominent black citizens of Detroit. Berry, however, dropped out of high school in the eleventh grade to become a professional boxer in hopes of becoming rich quick, a career he followed until 1950 when he was drafted by the United States Army for the Korean War.