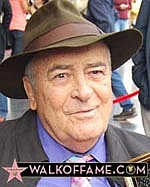 Bernardo Bertolucci was nominated and sponsored for his star by Pascal Vicedomini, Secretary General of the Instituto Capri Nel Mondo in 2006.  On February 19, 2008, the Hollywood Chamber of Commerce placed a star for renowned Italian Director Bernardo Bertolucci on the Walk of Fame. Due to illness, Bertolucci could not make it to the occasion. Today, on his rare visit to Hollywood, the Chamber marked the occasion and announced Bertolucci Day in Hollywood as the famed director visited his Hollywood Walk of Fame star. The event was held on Tuesday, November 19, 2013 at 2 p.m. at 6925 Hollywood Boulevard in front of the TCL Chinese Theatre. The Italian Consulate General’s delegation and Hollywood Chamber executives were on hand for this ceremonial homage. “We are thrilled that Maestro Bertolucci could be here on this special day to visit his Walk of Fame star,” stated Leron Gubler, President/CEO of the Hollywood Chamber of Commerce. “We have all been waiting for him for a long time and are glad he could be here to make history with us at his Walk of Fame star and in front of this historic venue.”

Bernardo Bertolucci, the Italian director whose films are known for their colorful visual style, was born in Parma, Italy, in 1940. He attended Rome University and became famous as a poet. He served as assistant director for Pier Paolo Pasolini in the film “Accattone” (1961) and directed “The Grim Reaper” (1962). His second film, “Before the Revolution” (1964), which was released in 1971, received an Academy Award nomination for best screenplay. Bertolucci also received an Academy Award nomination as best director for “Last Tango in Paris” (1972), and the best director and best screenplay for the film “The Last Emperor” (1987), which walked away with nine Academy Awards. His latest movie “Me and You” was originally going to be shot in 3D, but he abandoned the idea when the cameras proved too cumbersome for the intimate environment of the film. His famous ‘The Last Emperor’ was screened in 3D recently at Hollywood’s famed TCL Chinese Theatre. 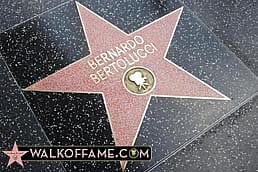