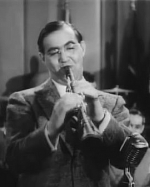 In the mid-1930s, Benny Goodman led one of the most popular musical groups in America. His January 16, 1938 concert at Carnegie Hall in New York City is described by critic Bruce Eder as “the single most important jazz or popular music concert in history: jazz’s ‘coming out’ party to the world of ‘respectable’ music.”

Goodman’s bands launched the careers of many major names in jazz, and during an era of segregation, he also led one of the first racially-integrated musical groups. Goodman continued to perform to nearly the end of his life, including exploring his interest in classical music.

Goodman was born in Chicago, Illinois, the ninth of twelve children of poor Jewish immigrants from the Russian Empire, who lived in the Maxwell Street neighborhood. His father was David Goodman, a tailor from Warsaw; his mother was Dora Rezinski. His parents met in Baltimore, Maryland, and moved to Chicago before Benny was born.

When Benny was 12, his father enrolled him and two of his older brothers in music lessons at the Kehelah Jacob Synagogue. The next year he joined the boys club band at Jane Addams’ Hull House, where he received lessons from director James Sylvester. He also received two years of instruction from the classically trained clarinetist Franz Schoepp.