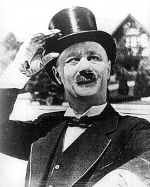 Ben Turpin was a American cross-eyed comedian and actor, best remembered for his work in silent films.

Turpin was born Bernard Turpin in New Orleans, Louisiana on September 19, 1869, the son of a candy store owner.

He worked in vaudeville, burlesque, and circuses. Turpin had a distinctive appearance, with a small wiry frame, a brush mustache, and crossed eyes. Turpin’s famous eyes, he said, only crossed as a young adult after he suffered an accident. Turpin was convinced that the crossed eyes were essential to his comic career; his co-workers recalled that after he received any blow to the head he made a point of looking himself in the mirror to assure himself that they had not become uncrossed. Turpin was a devout Catholic, and his workmates would occasionally goad him by threatening to pray that Turpin’s eyes would uncross, thus depriving him of his livelihood.

Turpin famously bought a $25,000 insurance policy with Lloyd’s of London, payable if his eyes ever uncrossed. He developed a vigorous style of physical comedy, including an ability to stage comic pratfalls that impressed even his fellow workers in the rough-and-tumble world of silent comedy. One of his specialties was a backward tumble he called the “hundred an’ eight'” .