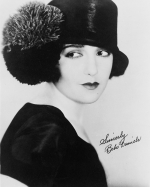 Bebe Daniels was an American actress, singer, dancer, writer and producer. She began in Hollywood during the silent movie era as a child actress, and later gained fame on radio and television in England. Throughout her life, Bebe Daniels made over 230 films.

Daniels was born Phyllis Virginia Daniels in Dallas, Texas. Her father was a theater manager and her mother a stage actress. The family moved to Los Angeles, California in her childhood and she began her acting career at the age of four in the first version of The Squaw Man. That same year she also went on tour in a stage production of Shakespeare’s Richard III. The following year she participated in productions by Morosooa and David Belasco.

By the age of seven Daniels had her first starring role in film as the young heroine in A Common Enemy. At the age of nine she starred as Dorothy Gale in the 1910 short film The Wonderful Wizard of Oz. At the age of fourteen she starred opposite film comedian Harold Lloyd in a series of Lonesome Luke two-reel comedies starting with the 1915 film Giving Them Fits. The two eventually developed a publicized romantic relationship and were known in Hollywood as “The Boy” and “The Girl.”

In 1919, she decided to move to greater dramatic roles and accepted a contract offering from Cecil B. Demille, who gave her secondary roles in such films as Male and Female, Why Change Your Wife?, and The Affairs of Anatol .