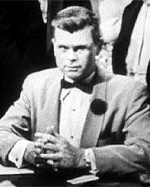 Nelson was born Robert Haakon Nielsen in San Francisco, California, of Norwegian ancestry, the son of Betsy and Trygve Nielsen. He began acting in school at the age of fifteen. He graduated from the University of California, Berkeley in 1941 and, because of his theatrical efforts in school, was almost immediately signed to a motion picture contract by Metro-Goldwyn-Mayer Studios.

Nelson made his screen debut in the role as Paul Clark in Shadow of the Thin Man starring William Powell and Myrna Loy, with Donna Reed. He followed that with his role as Lew Rankin in the film noir crime/drama Johnny Eager starring Robert Taylor and Lana Turner.

During his military service in World War II, Nelson debuted on the Broadway stage in one of the leading roles, Bobby Grills, in Moss Hart’s play Winged Victory. His next Broadway appearance was as Peter Sloan in Hart’s Light Up the Sky, which was a first-rate success. He went on to appear on Broadway with Barbara Bel Geddes in the original Broadway production of The Moon is Blue; he was the last surviving original cast member of the production. During the play’s run he also starred in a CBS half-hour drama called The Hunter, premiering in July 1952. He played Bart Adams, a wealthy young American whose business activities involved him in a series of adventures.