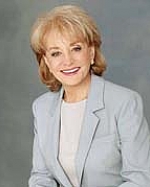 Barbara Jill Walters is an American broadcast journalist and author, who has hosted morning television shows, the television newsmagazine, and co-anchor of the ABC Evening News and correspondent on ABC World News. Walters was first known as a popular TV morning news anchor for over 10 years on NBC's Today, where she worked with Hugh Downs and later hosts Frank McGee and Jim Hartz. Walters later spent 25 years as co-host of ABC's newsmagazine 20/20. She was the first female co-anchor of network evening news, working with Harry Reasoner on the ABC Evening News and was later a correspondent for ABC World News Tonight with Charles Gibson.

Walters was born in Boston, MA to Louis "Lou" Walters and his wife, Dena Seletsky, both of whom were Jewish and descendants of refugees from the former Russian Empire, now Eastern Europe. Walters' paternal grandfather, Isaac Abrahams, was from what is now ?ód?, Poland, and first immigrated to England, changing his name to Abraham Walters. Walters' father was born there c. 1896, and moved to the United States with his family in 1900. In 1937, her father opened the New York version of the Latin Quarter; he also was a Broadway producer. Walters' brother, Burton, died in 1932 of pneumonia. Walters' elder sister, Jacqueline, was born developmentally disabled and died of ovarian cancer in 1985.

According to Walters, being surrounded by celebrities when she was young kept her from being "in awe" of them. When he was a young man, Walters' father lost his nightclubs and the family's penthouse on Central Park West. As Walters recalled, "He had a breakdown. He went down to live in our house in Florida, and then the Government took the house, and they took the car, and they took the furniture." Of her mother, she said, "My mother should have married the way her friends did, to a man who was a doctor or who was in the dress business."