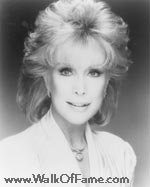 Education:
Received an Honorary Doctor of Laws from Univ of West Los Angeles

Barbara Eden is an American film and television actress and singer who is best known for her starring role in the sitcom I Dream of Jeannie.

Eden was born Barbara Jean Morehead in Tucson, Arizona, the daughter of Alice Mary and Hubert Henry Morehead. Her parents divorced when she was 3, she and her mother Alice moved to San Francisco where later her mother married Harrison Connor Huffman, a telephone lineman. The Great Depression deeply affected the Huffman family, and as they were unable to afford many luxuries, Barbara’s mother entertained the children by singing songs. This musical background left a lasting impression on the actress, who began taking acting classes because she felt it might help her improve her singing.