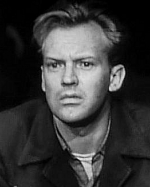 Arthur Kennedy was an American stage and film actor best known for his performances in Westerns.

Kennedy was born John Arthur Kennedy in Worcester, Massachusetts, the son of Helen and J.T. Kennedy, a doctor. Kennedy graduated from Worcester Academy and Carnegie Mellon School of Drama. An award in Kennedy’s honor is now presented every year to a deserving actor at Carnegie Mellon.

Kennedy got his break when he was discovered by James Cagney. His first film role was of Cagney’s younger brother in City for Conquest in 1940. He was equally adept as hero or villain, and was noted for his mastery of complex, multi-faceted roles. He appeared in many Western films and police dramas.

He appeared in many notable films from the early 1940s through to the mid 1960s, including High Sierra, They Died with Their Boots On, Boomerang, Champion, The Window, The Glass Menagerie, Bright Victory, The Lusty Men, Rancho Notorious, The Desperate Hours, Lawrence of Arabia, Trial, Peyton Place, Some Came Running, A Summer Place, Elmer Gantry and Fantastic Voyage.