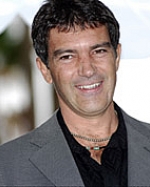 José Antonio Domínguez Banderas, better known as Antonio Banderas, is a Spanish film actor, film director, film producer and singer. He began his acting career at age 19 with a series of films by director Pedro Almodóvar and then appeared in high-profile Hollywood films including Assassins, Evita, Interview with the Vampire, Philadelphia, Desperado, The Mask of Zorro, Spy Kids and the Shrek sequels.

Banderas was born in Málaga, Andalusia, in Spain, in 1960; he was the son of Ana Banderas, a school teacher, and José Domínguez, a police officer in the Guardia Civil. He also has one younger brother, Francisco. He took his mother’s surname as his stage name. He initially wanted to play soccer professionally, but his dream ended when he broke his foot at age 14.

Banderas’ acting career began at the age of 19, when he worked in small theatres during the Movida period. He first gained wide attention of the Spanish audience through starring on a set of films by director Pedro Almodóvar between 1982 and 1990. Labyrinth of Passion where he plays a gay man, Matador where he plays a troubled young man who is confused about his sexuality, Law of Desire where he plays a psychotic gay stalker, Women on the Verge of a Nervous Breakdown, and Tie Me Up! Tie Me Down!, in which he performed his breakthrough role as “Ricky”.

He began appearing in American films in the early nineties; some of his earlier roles there included the 1992 film, The Mambo Kings, as well as a supporting role in the Oscar-winning 1993 film, Philadelphia. He appeared in several major Hollywood releases in 1995, including a starring role in the Robert Rodriguez-directed film, Desperado. In 1996, he starred alongside Madonna in Evita, an adaptation of the musical by Andrew Lloyd Webber and Tim Rice in which he played the narrator, Che, a role originally played on Broadway by Mandy Patinkin. He also made success with his role as the legendary Mexican masked swordsman, Zorro in the 1998 film The Mask of Zorro, for which he was the first Spanish actor to portray the character after over 80 years since Zorro’s creation. In 2000, Ridley Scott offered Banderas a part as a peasant in his film, Gladiator and he reluctantly accepted, but demanded exactly $50,000 for the role, which is currently the world record for the highest salary of an extra.