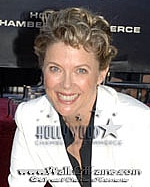 See the Hollywood Walk of Fame Star Ceremony announcement
Annette Francine Bening is an American actress. Her break-through role in The Grifters was followed with critically acclaimed roles in films such as Bugsy and American Beauty. In 1992, she married American actor and director Warren Beatty, with whom she has four children.

Bening was born in Topeka, Kansas, the daughter of Shirley, a church singer and soloist, and Arnett Grant Bening, a sales training consultant and insurance salesman. Her parents, natives of Iowa, were practicing Episcopalians and conservative Republicans. Her sister and two brothers are Jane Bening, Bradley Bening and Byron Bening. The family moved to Wichita, Kansas, in 1959, where she spent her early childhood. In 1965, her father took a job with a company in San Diego, California, and they moved there. She began acting in junior high school, playing the lead in The Sound of Music. She studied drama at Patrick Henry High School.

She then spent a year working as a cook on a charter boat taking fishing parties out on the Pacific Ocean, and scuba diving for recreation. She attended San Diego Mesa College, then completed an academic degree in theatre arts at San Francisco State University. Bening joined the acting company at the American Conservatory Theater in San Francisco while studying acting as part of the Advanced Theatre Training Program. During this time she established herself as a formidable acting talent in roles like Shakespeare’s Lady Macbeth.

Bening moved to New York City, where she debuted off-Broadway at Second Stage Theatre in the role of ‘Holly Dancer’ in Tina Howe’s widely acclaimed Coastal Disturbances opposite Tim Daly, and for which she earned a Tony Award nomination for Best Featured Actress in a Play. However, despite the praise and recognition, it took some time for that success to translate to her film career. Her television debut was with the made-for-TV movie Manhunt for Claude Dallas. Her first major role in a theatrical feature was in The Great Outdoors playing ‘Kate Craig’ opposite Dan Aykroyd and John Candy. Her next role was as the Marquise de Merteuil in Valmont opposite Colin Firth.