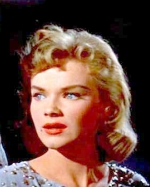 Anne Lloyd Francis is an American actress, famous for her role in the science fiction film classic Forbidden Planet, and as the female private detective in the television series Honey West. She won a Golden Globe and was nominated for an Emmy award for her role in Honey West. Francis holds the distinction of starring in the first TV series with a woman detective character's name in the title.

Anne Lloyd Francis was born in Ossining, New York in 1930, the only child of Phillip and Edith Francis. Francis entered show business at a young age, working as a model at age five to help her family during the Great Depression, and made her Broadway debut at the age of 11.

Over her career, Francis appeared in scores of TV shows and movies. She made her film debut in This Time for Keeps in 1947. In her early film career, she played supporting roles in films such as Susan Slept Here, So Young So Bad, and Bad Day at Black Rock. Her first leading role was in the 1955 film Blackboard Jungle. She is perhaps best-known on film for her role as Altaira in the significant S.F. film Forbidden Planet.

Francis found success in television, with several appearances on The Twilight Zone, including the title character in "Jess-Belle" and as Marsha White in "The After Hours." She was a frequent guest star in 1960s, 1970s, and 1980s TV movies and programs. She appeared in two episodes of the popular TV western The Virginian.