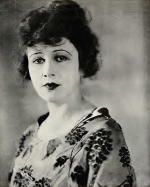 Anna Q. Nilsson was born in Ystad, Skåne County, Sweden in 1888. Her middle name, “Quirentia ” is derived from her date of birth, March 30 Saint Quirinius’ Day. At the age of 8 her father got a job at the local sugar factory in Hasslarp, a small community outside Helsingborg in Sweden where she spent most of her school years. She did very well in school, graduating with highest marks. Due to her good grades she was hired as sales clerk in Halmstad on the Swedish west coast, unusual for a young woman from a worker’s family at the time. But she had set her mind on going to America.

In 1905, she emigrated to the United States through Ellis Island. In the new country, the Swedish teenager started working as a nursemaid and learned English quickly. Soon she started working as a model. Already in 1907, she was named “Most beautiful woman in America”. Penrhyn Stanlaws, one of the most successful and sought after cover artists of his day, picked Anna Q. Nilsson to become one of his models.

Nilsson’s modeling led her to getting a role in the 1911 film Molly Pitcher. Films of special note for Anna were Seven Keys to Baldpate, Soldiers of Fortune, The Toll Gate and The Luck of the Irish, and The Lotus Eater .