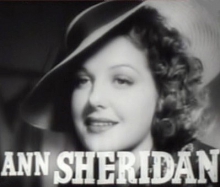 Ann Sheridan was an American film actress. Born Clara Lou Sheridan in Denton, Texas on February 21, 1915, she was a college student when her sister sent a photograph of her to Paramount Pictures. She subsequently entered and won a beauty contest, with part of her prize being a bit part in a Paramount film. She abandoned college to pursue a career in Hollywood.

She made her film debut in 1934, aged 19, in the film Search for Beauty, and played uncredited bit parts in Paramount films for the next two years. Paramount made little effort to develop Sheridan’s talent, so she left, signing a contract with Warner Bros. in 1936, and changing her name to “Ann Sheridan.”

Sheridan’s career prospects began to improve. The red-haired beauty would soon become Warner’s top sex symbol. She received as many as 250 marriage proposals from fans in a single week. Tagged “The Oomph Girl,” Sheridan was a popular pin-up girl in the early 1940s.

She was the heroine of a novel, Ann Sheridan and the Sign of the Sphinx, written by Kathryn Heisenfelt, published by Whitman Publishing Company in 1943. While the heroine of the story was identified as a famous actress, the stories were entirely fictitious. The story was probably written for a young teenage audience and is reminiscent of the adventures of Nancy Drew. It is part of a series known as “Whitman Authorized Editions”, 16 books published between 1941-1947 that always featured a film actress as heroine.