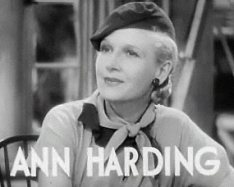 Born Dorothy Walton Gatley at Fort Sam Houston in San Antonio, Texas, to George G. Gatley and Elizabeth “Bessie” Crabb. The daughter of a career army officer, she traveled often during her early life. Her father was born in Maine and served in the American Expeditionary Force in World War I. He died in San Francisco, California in 1931. The family finally settled in New York; Harding attended Bryn Mawr College in Bryn Mawr, PA, on the Pennsylvania Main Line outside Philadelphia.

Following school, she found employment as a script reader. She began acting and made her Broadway debut in 1921. She soon became a leading lady, who kept in shape by using the services of Sylvia of Hollywood. In 1929, she made her film debut in Paris Bound, opposite Fredric March. In 1931, she was nominated for the Academy Award for Best Actress for Holiday.

First under contract to Pathé, which was subsequently absorbed by RKO studio, Harding, co-starred with Ronald Colman, Myrna Loy, Herbert Marshall, Leslie Howard, Richard Dix, and Gary Cooper, often on loan out to other studios, such as MGM and Paramount. At RKO, Harding, along with Helen Twelvetrees and Constance Bennett, comprised a trio who specialized in the “women’s pictures” genre.