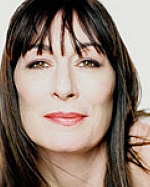 See the Hollywood Walk of Fame Star Ceremony announcement
ANJELICA HUSTON HONORED WITH 2,398th STAR ON THE HOLLYWOOD WALK OF FAME at 6270 Hollywood Boulevard in front of the W Hotel on Friday, January 22, 2010

An award-winning actress and director, Anjelica Huston continues her renowned family’s legacy in film, which began with her grandfather, Walter, and her father, John.

Huston was born on July 8, 1951, to director and actor John Huston and Italian American (from New York) prima ballerina Enrica (Ricki) Soma. She spent most of her childhood overseas, in Ireland and England, and in 1969 dipped her toe into the acting profession, taking a few small roles in her father’s films. She relocated to the United States where she modeled for many years. While modeling, Huston had a few more small film roles, but decided to focus more on movies in the late 1970’s, studied acting and began to get roles.

Huston most recently starred in Clark Gregg’s directorial debut, “Choke,” opposite Sam Rockwell and Kelly MacDonald. The dark comedy won the Sundance Special Jury Prize (2008) for work by an ensemble cast. She also was seen recently in an acclaimed cameo in “The Darjeeling Limited,” directed by Wes Anderson and starring Adrien Brody, Owen Wilson, and Jason Schwartzman. Huston’s most current role is in the Walt Disney Picture’s film WHEN IN ROME which opens January 29th.

Throughout her career, Huston has received a multitude of awards for her work, including multiple honors from the National Society of Film Critics, two Independent Spirit Awards, the Los Angeles and New York Film Critics Awards, and an honor from Women in Film. Huston received a Best Supporting Actress Oscar® for her role as Maerose Prizzi in the black comedy “Prizzi’s Honor,” in which she starred opposite Jack Nicholson and Kathleen Turner. In 2005, Huston received a Golden Globe Award® for her role in HBO’s original movie “Iron Jawed Angels,” in which she starred opposite Hilary Swank and Julia Ormond.

Her directorial debut was an unflinching adaptation of Dorothy Allison’s best-selling memoir, “Bastard Out of Carolina,” which garnered Huston critical acclaim. She received an Emmy® nomination for her work on the controversial drama as well as a Director’s Guild nomination. Huston directed, produced and starred in “Agnes Browne,” which was presented at the Directors’ Fortnight at the 2000 Cannes Film Festival.

Her television credits include Robert Ludlum’s “Covert One: The Hades Factor,” as well as a recurring role on Showtime’s original series “Huff,” starring Hank Azaria. Huston received Emmy® nominations for her performance in the CBS miniseries “Buffalo Girls,” her performance opposite Robert Duvall and Tommy Lee Jones in the miniseries “Lonesome Dove,” her performance opposite Sam Neill in the television film “Family Pictures,” and her work in the TNT miniseries “The Mists of Avalon.” Huston also starred on “Medium” opposite Patricia Arquette in a seven-episode arc that debuted in January 2008 for which she received an Emmy® nomination for Outstanding Guest Actress in a Drama Series.

Huston currently serves on the Board of Directors at the National University of Ireland Galway’s John Huston School of Film and Digital Media. She is a member of the Film Foundation’s Artist’s Rights Council and is a recent spokesperson for PETA and the US Campaign for Burma. *Supports numerous charities, organizations and institutions including Homeboy Industries, Global Green USA, The Library Foundation, Amnesty International, Project Angel Food and the Thoroughbred Relief Foundation, among others.