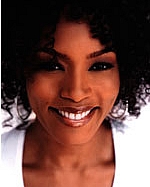 Angela Evelyn Bassett is an American actress. She has become well-known for her biographical film roles portraying real life women in African American culture, perhaps most prominently as singer Tina Turner in the motion picture What's Love Got to Do with It, as well as her portrayal of Betty Shabazz in the films Malcolm X and Panther, Rosa Parks in the The Rosa Parks Story, Katherine Jackson in the miniseries The Jacksons: An American Dream and Voletta Wallace in the film Notorious.

Bassett was born in Harlem and relocated to St. Petersburg, Florida as a child. She and her sister D'nette were raised by their social worker/civil servant mother, Betty. As her interest in entertainment developed, she and her sister would often put on shows, reading poems or performing popular music for their family. At Boca Ciega High School, Bassett was a cheerleader and a member of the debate team, student government, drama club and choir.

Bassett attended Yale University and received her B.A. degree in African-American studies in 1980. In 1983, she earned a Master of Fine Arts degree from the Yale School of Drama. At Yale, Bassett met her future husband Courtney B. Vance, a 1986 graduate of the drama school. After graduation, Bassett worked as a receptionist for a beauty salon and as a photo researcher.

Bassett soon looked for acting work in the New York theater. One of her first New York performances came in 1985 when she appeared in J. E. Franklin's Black Girl at Second Stage Theatre. She appeared in two August Wilson plays at the Yale Repertory Theatre under the direction of her long-time instructor Lloyd Richards. The Wilson plays featuring Bassett were Ma Rainey's Black Bottom and Joe Turner's Come and Gone. In 2006, she had the opportunity to work on the Wilson canon again, starring in Fences alongside longtime collaborator Laurence Fishburne at the Pasadena Playhouse in California.