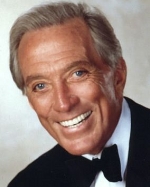 Williams was born in Wall Lake, Iowa, the son of Jay Emerson and Florence Williams. He first performed in a children's choir at the local Presbyterian church. Williams and his three older brothers Bob, Don, and Dick formed the Williams Brothers quartet in the late 1930s, and they performed on radio in the Midwest, first at WHO in Des Moines, Iowa, and later at WLS in Chicago and WLW in Cincinnati. Williams graduated from Western Hills High School in Cincinnati and his brother was engaged to Gene Ingram's car-pool partner, Peggy. The Williams Brothers appeared with Bing Crosby on the hit record "Swinging on a Star". This led to a nightclub act with entertainer Kay Thompson from 1947 to 1951.

Williams' solo career began in 1953. He recorded six sides for RCA Victor's label "X," but none of them were popular hits.

After finally landing a spot as a regular on Steve Allen's Tonight Show in 1954, he was signed to a recording contract with Cadence Records, a small label in New York run by conductor Archie Bleyer. His third single, "Canadian Sunset" reached #7 in the Top Ten in August 1956, and was soon followed by his only Billboard #1 hit, "Butterfly" in February 1957. More hits followed, including "The Hawaiian Wedding Song", "Are You Sincere", "The Village of St. Bernadette", "Lonely Street", and "I Like Your Kind Of Love" with Peggy Powers before Williams moved to Columbia Records in 1961, having moved from New York to Los Angeles and gaining another hit with "Can't Get Used to Losing You". In terms of chart popularity, the Cadence era was Williams' peak although songs he introduced on Columbia became much bigger standards. Two top ten hits from the Cadence era, "Butterfly" and "I Like Your Kind of Love" were apparently believed to not suit Williams' later style; they were not included on a Columbia reissue of his Cadence greatest hits in the 1960s.