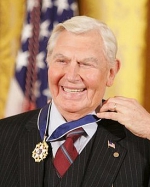 Andy Samuel Griffith is an American actor, director, producer, Grammy Award-winning Southern-gospel singer, and writer. He gained prominence in the starring role in director Elia Kazan’s epic film A Face in the Crowd before he became better known for his television roles, playing the lead characters in the 1960s situation comedy, The Andy Griffith Show, and in the 1980s&ndash;1990s legal drama, Matlock. Griffith was awarded the Presidential Medal of Freedom by U.S. President George W. Bush on November 9, 2005.

Griffith was born in Mount Airy, North Carolina, the only child of Geneva and Carl Lee Griffith. At a very young age, Griffith had to live with relatives until his parents could afford to get a home of their own. Without a crib or a bed, he slept in drawers for a few months. In 1929, when Griffith was three years old, his father took a job working as a carpenter and was finally able to purchase a home in Mount Airy’s “blue-collar” southside.

Like his mother, Griffith grew up listening to music. His father instilled a sense of humor from old family stories. By the time he entered school he was well aware that he was from what many considered the “wrong side of the tracks”. He was a shy student, but once he found a way to make his peers laugh, he began to come into his own.

As a student at Mount Airy High School, Griffith cultivated an interest in the arts, and he participated in the school’s drama program. A growing love of music, particularly swing, would change his life. Griffith was raised Baptist and looked up to Ed Mickey, a minister at Grace Moravian Church, who led the brass band and taught him to sing and play the trombone. Mickey nurtured Griffith’s talent throughout high school until graduation in 1944. Griffith was delighted when he was offered a role in The Lost Colony, a play still performed today on historic Roanoke Island, part of the history filled Outer Banks, the barrier islands that sit along most of coastal North Carolina. He performed as a cast member of the play for several years, playing a variety of roles, until he finally landed the role of Sir Walter Raleigh, the namesake of North Carolina’s capital.