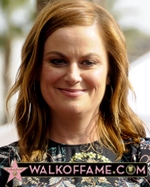 AMY POEHLER HONORED WITH
STAR ON THE HOLLYWOOD WALK OF FAME

The Hollywood Chamber of Commerce is proud to announce that Amy Poehler was honored today, December 3, 2015 with the 2,566th star on the Hollywood Walk of Fame  at 12:30 p.m. PST. The star in the category of Television was dedicated at 6767 Hollywood Boulevard in front of the Hollywood Wax Museum.

Helping Emcee and Hollywood Chamber President/CEO Leron Gubler to unveil the star were speakers Rashida Jones and Mike Schur. “We are thrilled to add Amy Poehler to our Walk of Fame. She has kept us in stitches for so many years with her career as one of Hollywood’s top comedic actresses,” stated Ana Martinez, producer of the Walk of Fame ceremonies. “Fans should be ready for a ceremony full of laughter!” she added.

Event was live-streamed exclusively on www.walkoffame.com.

Amy Poehler was born in Massachusetts. She began her meteoric rise when she joined the “Saturday Night Live” (SNL) cast from the Upright Citizens Brigade (UCB) a sketch/improv troupe that she co-founded. Poehler relocated to New York where UCB had a sketch show on Comedy Central for three seasons on which she was both a writer and performer. During the success of the TV show, UCB opened a training center in NYC and has since expanded with several locations in NYC and LA. The UCB theaters are regarded as the premiere sketch/improv comedy venues in the country, and the programs have helped catapult many star performers, writers and shows into the mainstream.

Poehler is one of Hollywood’s most versatile and sought after talents, with a number of high-profile projects in the works. Poehler will next star alongside Tina Fey in Universal Pictures’ “Sisters,” from director Jason Moore. The comedy will be released nationwide in theaters on December 18th.

She is also at work on two new film projects: “The House” opposite Will Ferrell, and “Balls,” a basketball comedy for Universal Pictures which she will star in and produce. Additionally, Poehler continues to serve as executive producer on both Comedy Central’s “Broad City” and Hulu’s “Difficult People”, both of which have been picked up for additional seasons.

Off-camera, Poehler produces and hosts Ask Amy on the award-winning online website Amy Poehler’s Smart Girls at the Party, which showcases real girls who are “changing the world by being themselves.” Her first book, “Yes Please,” was released in October 2014 and debuted at No. 1 on the New York Times Best Sellers list. The book went on to spend a total of 23 weeks on the list.

Poehler is perhaps best known for her starring role on the Primetime Emmy-nominated NBC comedy series “Parks and Recreation,” which completed its seventh and final season in February 2015. Her portrayal of Leslie Knope earned her a 2014 Golden Globe award for Best Actress in a Television Series, Musical, or Comedy, the award for Best Actress in a Television Comedy at the 2014 American Comedy Awards, and a 2013 Gracie Award. For her work on the show, Poehler also received six consecutive Primetime Emmy nominations, two additional Golden Globe nominations and two Screen Actors Guild Awards nominations.

In January 2015, Poehler returned for a third and final time as co-host of the 72nd Golden Globe Awards, a role that was again met with much critical acclaim.

In the film world, Poehler most recently lent her voice as the character Joy in Disney Pixar’s box office smash hit “Inside Out”. Her other film credits include “They Came Together,” “A.C.O.D., “Free Birds,” “Are You Here,” “Baby Mama,” “Blades of Glory,” “Mean Girls” and “Wet Hot American Summer” the latter of which returned as a series on Netflix in the summer of 2015.

Poehler has a production deal with her company, Paper Kite Productions through NBC’s studio Universal Television. In addition to current projects “Broad City,” “Difficult People” and “Balls,” Poehler recently sold a film project called “Schooled” which she will produce. Paper Kite has had an extremely successful selling season with pilot commitments for projects such as “Aunt Jill,” “Dumb Prince” and “Pre-Madonna.”

After her much buzzed about portrayal of Senator Hillary Clinton during the 2008 Presidential Election, Poehler completed her eighth and final season of SNL (and her fifth as the co-anchor of “Weekend Update”). Poehler boasted an impressive arsenal of outrageous characters, from the hyperactive Caitlin and one-legged reality show contestant Amber to a manic host of Good Morning Meth. Poehler also contributed memorable impressions of Kelly Ripa, Avril Lavigne, Sharon Osbourne, Paula Abdul, Sharon Stone and Michael Jackson. In 2008, she received her first Primetime-Emmy nomination for Outstanding Supporting Actress in a Comedy Series for her work on SNL. Due to a change in eligibility, this was an unprecedented nomination, making her the first performer in SNL history to land a spot in this category. She went on to receive a second nomination in this category for her work on her final season the following year. 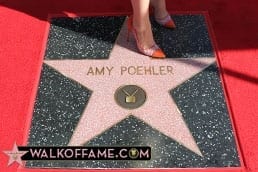