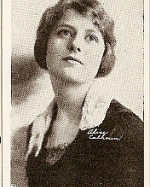 Born Alice Beatrice Calhoun in Cleveland, Ohio, she made her film debut in a role not credited in 1918 and went on to appear in another forty-seven films between then and 1929. As a star with Vitagraph in New York City, she moved with the company when it relocated to Hollywood. In the comedy, The Man Next Door, Calhoun plays Bonnie Bell. A critic complimented her on being pretty and playing her role successfully.The Man From Brodney’s is a movie which displays the fencing talent of actor J. Warren Kerrigan. Directed by David Smith for

Vitagraph, the film is based on a novel by George Barr McCutcheon. Calhoun plays Princess Genevra. Between Friends is a motion

picture adapted from a story by Robert W. Chambers. Anna Q. Nilsson and Norman Kerry are part of a cast in which Calhoun plays an artist’s Model. Among her other movies titles are