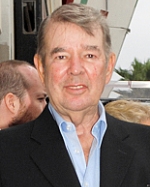 Regarded as a consummate producer and studio executive, Alan Ladd’s films have grossed billions of dollars and have received countless awards including over 150 Academy Award nominations and 50 wins.

Alan Ladd Jr.’s career as an agent, independent producer, and studio head began in 1963 when he served as a motion picture talent agent at Creative Management Associates for the likes of Judy Garland, Warren Beatty, and Robert Redford. Within five years, his passion for the industry took a decidedly more independent route as Ladd began work as a producer on a wide range of films featuring some of the era’s most respected stars including Elizabeth Taylor, Richard Burton, Ava Gardner, Ben Kingsley, Michael Caine, Anthony Hopkins, and Marlon Brando. With these remarkable collaborations under his belt, in 1973 he became Head of Creative Affairs at Twentieth Century Fox and within three years was President of the studio.

Soon after taking over the studio, Ladd had a fortuitous encounter with a relatively unknown filmmaker named George Lucas, who described for Ladd his dream of making an ambitious, character-driven science fiction story set in outer space. Though there was no precedent for this sort of big budget, risky filmmaking venture, Ladd took the largest gamble of his career and commissioned Lucas to write the screenplay Star Wars for Fox. Star Wars and the subsequent franchise that grew out of it has become one of the most profitable in motion picture history, generating billions of dollars in revenue and defining what would become known as the Hollywood blockbuster, a concept that forever changed the way movies were made.

After Star Wars, under Ladd’s leadership the studio produced some of the most successful films in its history, including Ridley Scott’s Alien; Julia starring Jane Fonda, Vanessa Redgrave, and Jason Robards; The Towering Inferno with its all-star cast of Steve McQueen, Paul Newman, William Holden, and Fred Astaire; The Omen directed by Richard Donner; as well as Young Frankenstein, Breaking Away, Norma Rae, All That Jazz, and The Rose, to name just a few.

In 1979, the producer launched The Ladd Company, and achieved huge success with the Oscar-winning Best Picture Chariots of Fire. Other films released by The Ladd Company include Philip Kaufman’s The Right Stuff, Ridley Scott’s Blade Runner, Once Upon a Time in America, and the top-grossing Police Academy series. He also helped launch the careers of future uber-producers Ron Howard and Brian Grazer on the film Night Shift, evidence once again of his impeccable instincts for new talent. His other films include The Man in the Iron Mask, An Unfinished Life starring Robert Redford, Jennifer Lopez, and Morgan Freeman, and Mel Gibson’s masterwork Braveheart, for which Ladd received the Best Picture Oscar. Braveheart, one of the most acclaimed romantic epics in recent cinema, was nominated for 10 Academy Awards and the winner of 5 statuettes, including Best Picture and Best Director.

Ladd’s career has taken him down many roads, including a tenure as Chairman and CEO of MGM/UA where he oversaw such projects as A Fish Called Wanda, Moonstruck, and Thelma & Louise, and continued the franchise successes of the Rocky and Poltergeist series. Additionally, his work as a human rights advocate has gained him the admiration of working film professionals in Hollywood and around the world, particularly his efforts to expose gender and racial inequalities in his industry.

In addition to Affleck’s Gone Baby Gone due out later this year, Ladd’s upcoming production slate includes the English drama Tortoise and the Hare, and the historical Chinese epic A Dream of Red Mansions, starring Oscar nominee Ken Watanabe, which will begin production in October of this year. In addition to his producing efforts, Ladd is still an active member of the Producers Guild of America, the American Film Institute, and the Academy of Motion Picture Arts and Sciences.