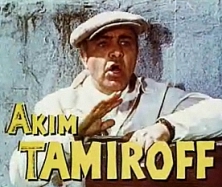 Akim Mikhailovich Tamiroff, Tiflis, Russian Empire was a Russian actor. He won the first Golden Globe Award for Best Supporting Actor. He was born of Armenian ethnicity, trained at the Moscow Art Theatre drama school. He arrived in the US in 1923 on a tour with a troupe of actors and decided to stay. Tamiroff managed to develop a career in Hollywood despite his thick Russian accent.

Tamiroff’s film debut came in 1932 in an uncredited role in Okay, America!. He performed in several more uncredited roles until 1935, when he co-starred in The Lives of a Bengal Lancer. The following year, he was cast in the title role in The General Died at Dawn, for which he was nominated for the Academy Award for Best Supporting Actor. He appeared in the 1937 musical High, Wide, and Handsome and the 1938 proto-noir Dangerous to Know opposite Anna May Wong, frequently singled out as his best role.

In the following decade, he appeared in such films as The Buccaneer, The Great McGinty, The Corsican Brothers, Tortilla Flat, Five Graves to Cairo, His Butler’s Sister, For Whom the Bell Tolls, for which he received another Oscar nomination, and The Miracle of Morgan’s Creek. In later years, Tamiroff appeared in Ocean’s Eleven, Topkapi and had a long collaboration with Orson Welles including Touch of Evil, Mr Arkadin, The Trial and Welles unfinished version of Don Quixote where he played Sancho Panza.

While Tamiroff may not be a household name now, his malapropistic performance as the boss in The Great McGinty inspired the cartoon character Boris Badenov, the male half of the villainous husband-and-wife team Boris and Natasha on The Rocky and Bullwinkle Show. He was also spoofed in a 1969 episode of the TV show H.R. Pufnstuf entitled “The Stand-in” in which a frog named “Akim Toadanoff” directs a movie on Living Island.