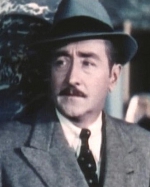 Adolphe Jean Menjou was an American actor. His career spanned both silent films and talkies, appearing in such films as The Sheik, A Woman of Paris, Morocco, and A Star is Born. He was nominated for an Academy Award for The Front Page in 1931.

Menjou was born in Pittsburgh, Pennsylvania to a French father and an Irish mother from Galway. He was raised Catholic and attended the Culver Military Academy, graduating from Cornell University with a degree in engineering. Attracted to the vaudeville stage, he made his movie debut in 1916 in The Blue Envelope Mystery. During World War I, he served as a captain in the ambulance service.

Returning from the war, he became a star in such films as The Sheik and The Three Musketeers. When he starred in 1923’s A Woman of Paris, he solidified the image of a well-dressed man-about-town. Menjou was famous for wearing fine clothing in many of his films. His career stalled with the coming of talkies, but in 1930, he starred in Morocco, with Marlene Dietrich. He was nominated for an Academy Award for The Front Page. In 1947, Menjou cooperated with the House Committee on Un-American Activities in its hunt for Communists in Hollywood. Menjou was a leading member of the Motion Picture Alliance for the Preservation of American Ideals, a group formed to oppose Communist influence in Hollywood. Other members included John Wayne, Barbara Stanwyck and her husband, actor Robert Taylor.