Adela Rogers St. Johns was an American journalist, novelist, and screenwriter. She wrote a number of screenplays for silent movies and, late in life, appeared with other early twentieth-century figures as one of the ‘witnesses’ in Warren Beatty’s Reds, but she is best remembered for her groundbreaking exploits as a “girl reporter” during the 1920s and 1930s.

St. Johns was born in Los Angeles, California, the daughter of a prominent Los Angeles criminal lawyer, Earl Rogers, who was a friend of publishing magnate William Randolph Hearst. She obtained her first job at age 19 working as a reporter for Hearst’s San Francisco Examiner. She reported on crime, politics, society, and sports news before leaving the newspaper in the early 1920s. St. Johns then became noted for interviewing movie stars for Photoplay magazine. She also wrote short stories for Cosmopolitan, The Saturday Evening Post, and other magazines and finished nine of her 13 screenplays before returning to reporting for Hearst newspapers.

Writing in a distinctive, emotional style, St. Johns reported on, among other subjects, the controversial Jack Dempsey?Gene Tunney ?long-count? fight in 1927, the treatment of the poor during the Great Depression, and the 1935 trial of Bruno Richard Hauptmann for kidnapping and murdering the son of Charles Lindbergh. In the mid-1930s she moved to Washington, D.C., to report on national politics. Her coverage of the assassination of Senator Huey Long in 1935, the abdication of King Edward VIII in 1936, the Democratic National Convention of 1940, and other major stories made her one of the best-known reporters of the day. St. Johns again left newspaper work in 1948 in order to write books, and to teach at a series of universities.

In 1962 she published Final Verdict, a biography of her father Earl Rogers. The book was adapted for a TNT television film in 1991; Olivia Burnette portrayed the young Nora Rogers. 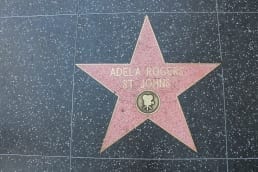