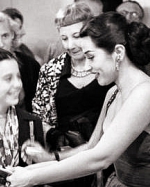 Yma Sumac was a noted Peruvian soprano. In the 1950s, she was one of the most famous proponents of exotica music and became an international success, based on the merits of her extreme vocal range, which was said to be “well over four octaves” and was sometimes claimed to span even five octaves at her peak.

Zoila Augusta Emperatriz Chávarri del Castillo was born on September 10, 1922, in Ichocán, Cajamarca, Peru. While one of her “official” websites says that the “official date” of her birth is September 10, the date on a different “official” website is given as September 13, 1922. Other dates mentioned in her various biographies range from 1921 to 1929. Some sources claim that she was not born in Ichocán, but in a nearby village, or possibly in Lima, and that her family owned a ranch in Ichocán where she spent most of her early life. Stories published in the 1950s claimed that she was an Incan princess, directly descended from Atahualpa. A story claiming that she was born Amy Camus?”Yma Sumac” backwards?in Brooklyn or Canada was fabricated while she was performing in New York City in the early 1950s.

Chávarri adopted the stage name of Imma Sumack before she left South America to go to the U.S. The stage name was based on her mother’s name, which was derived from Ima Shumaq, Quechua for “how beautiful!” although in interviews she claimed it meant “beautiful flower” or “beautiful girl”.

Imma Sumack first appeared on radio in 1942 and married composer and bandleader, on June 6 of the same year. She recorded at least eighteen tracks of Peruvian folk songs in Argentina in 1943. These early recordings for the Odeon label featured Moisés Vivanco’s group, Compañía Peruana de Arte, a group of forty-six Indian dancers, singers, and musicians.