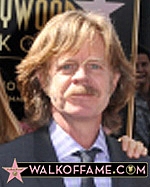 The Hollywood Chamber of Commerce honored actors Felicity Huffman and William H. Macy with a rare double ceremony at 7072 Hollywood Boulevard at Gateway to the Walk of Fame at La Brea on Wednesday, March 7, 2012

Emcee Leron Gubler, President/CEO of Hollywood Chamber of Commerce and guest speakers David Mamet and Aaron Sorkin helped unveil the 2,463rd and 2,464th stars in the category of Television for Felicity Huffman, and Motion Pictures for William Macy.

Felicity Huffman has proven herself as an exceptional actress in both dramatic and comedic roles.  Huffman earned an Academy Award nomination for her stunning performance in “Transamerica,” as well as a Golden Globe Award and Independent Spirit Award for the same role.  Huffman has also been honored with an Emmy and a Screen Actors Guild Award for Best Lead Actress in a Comedy Series for her role on “Desperate Housewives.”

Huffman can currently be seen starring as “Lynette Scavo” on the ABC hit “Desperate Housewives” on ABC on Sunday nights at 9:00 PM.  The cast won the 2004 SAG Award for Outstanding Performance by an Ensemble in a Comedy Series and most recently won a Golden Globe for Best Television Series-Comedy or Musical.  Huffman was also nominated for Best Actress in a Television Comedy for “Desperate Housewives.”

Huffman’s films include: “Phoebe in Wonderland,” “Georgia Rule,” “Christmas with the Cranks” and “Raising Helen”.

Among her television movie credits are “Reversible Errors” and “Door to Door,” both with William H. Macy, “Out of Order,”  “Path to War,”   “The Heart Department,” “Harrison, Cry of the City,” “Quicksand,” “Heart of Justice,” “The Water Engine” and Underworld.”  Other television credits include “Chicago Hope,” “X-Files,” “Law and Order,” “Bedtime Stories” and appearances as a series regular on “The Human Factor,” the ABC series “Sports Night,” “Thunder Alley,” “Early Edition,” “Jules,” and “The Golden Years.”

Huffman is a founding member of the Atlantic Theater Company, an off-Broadway theater company where she has been featured in numerous plays including “Dangerous Corner,” “Shaker Heights” and “The Joy of Definitely Going Somewhere.”  Among her other stage credits are “Oh Hell,” directed by Greg Mosher at the Lincoln Center Theatre, “Boy’s Life,” directed by William H. Macy;“The Loop” and “Grotesque Love Songs.”  Huffman also appeared in David Mamet’s “Speed the Plow.”  She received an OBIE Award for her portrayal of Donnie in Mamet’s “Cryptogram.”

William H. Macy, an Oscar and Golden Globe nominee and Emmy and SAG Award winner, is one of the most distinguished talents of his generation.   Macy currently stars in the Showtime series “Shameless,” which premiered in 2011. He is currently in production on the second season of the series, which returned in January 2012. The series has recently been picked up for a 3rd season.

Macy may be best known for his portrayal of Jerry Lundergaard in "Fargo," for which he received an Oscar® nomination and won an Independent Spirit Award as Best Supporting Actor.  His distinguished film credits include "Spartan," "In Enemy Hands," "Magnolia," "Pleasantville," "Happy Texas," "State and Main," "Jurassic Park 3," "Focus," "Welcome to Collinwood," "Psycho," "A Civil Action," "Boogie Nights," "Wag The Dog," "Air Force One," "Ghosts of Mississippi," "Mr. Holland's Opus," "The Client," "Searching for Bobby Fischer," "Radio Days" “Wild Hogs” and many others.

Macy also stole scenes in the critically-acclaimed feature, "Seabiscuit," the American epic of triumph and perseverance set during the Great Depression. Macy was nominated for a Golden Globe for his role as Tick Tock McLaughlin and the film was nominated for Best Picture. He recently completed production on independent film “The Surrogate.”

Macy has been no less prolific on the small screen.  He received an Emmy nomination for his role in “Umney’s Last Case” and was seen in TNT's Emmy-nominated "The Wool Cap." Macy was nominated for an Emmy, a Golden Globe and a SAG Award for his performance.  In addition, the movie was nominated for an Emmy and a Critics' Choice Award.  In 2003, Macy starred  in the Showtime Original Picture "Stealing Sinatra,” for which he received an Emmy nomination in the category of "Outstanding Supporting Actor in a Miniseries or a Movie" for his performance.

In 1972 Macy co-founded the St. Nicholas Theater along with David Mamet and Steven Schachter in Chicago. Macy originated roles for several of Mamet's classic original productions, among them, Bobby in “American Buffalo,” and Lang in “The Water Engine, “soon establishing his feature film presence with writer/director Mamet.  He continued with Mamet as a Mafioso driver in "Things Change," a Marine in "House of Games" and an FBI agent in "Wag the Dog."

Other husband and wife or partner notables that are next to each other on the Walk of Fame but had separate ceremonies include: Bob and Dolores Hope; Kevin Bacon and Kyra Sedgwick; Sherry Lansing and William Friedkin; Sonny & Cher; Ozzie and Harriet Nelson; Betty White and Allen Ludden; Tim Robbins and Susan Sarandon;. Producers Richard Donner and Lauren Shuler Donner were the first married couple to be honored on the same day with double stars on October 16, 2008. 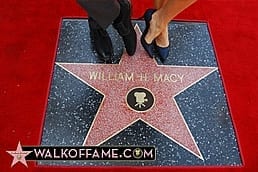