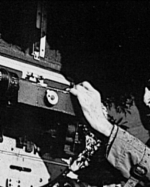 About
William A. Wellman

William Augustus Wellman was an American film director. Although Wellman began his film career as an actor, he worked on over 80 films, as director, producer and consultant but most often as a director, notable for his work in crime, adventure and action genre films, often focusing on aviation themes, a particular passion. He also directed several well regarded satirical comedies.

Wellman directed the 1927 film Wings, which became the first film to win an Academy Award for Best Picture at the 1st Academy Awards ceremony.

Wellman’s father, Arthur Gouverneur Wellman, was a New England Brahmin of English-Welsh-Scottish and Irish descent. William was a great-great-great grandson of Francis Lewis of New York, one of the signatories to the Declaration of Independence. His much beloved mother was an Irish immigrant named Cecilia McCarthy.

Wellman was kicked out of Newton High School in Newton Highlands, Massachusetts, for dropping a stink bomb on the principal’s head. Ironically, his mother was a probation officer who was asked to address Congress on the subject of juvenile delinquency. Wellman worked as a salesman and then at a lumber yard, before ending up playing professional ice hockey, which is where he was first seen by Douglas Fairbanks, who suggested that with Wellman’s good looks he could become a film actor.